The most common accidents that result in death or injury are preventable.
They include dog attacks, attempts to climb or get through wire fencing, tipping over, getting caught when climbing over stored items, falling into swimming pools, and being hit by a car because the yard was not secure and the tortoise escaped.
Even though tortoises have amazing ability to heal, we suggest you seek veterinary help.
Even superficial wounds should be treated, because a maggot infestation can be more of a threat than the injury.

Upper respiratory tract disease (URTD) is common and may be life threatening. 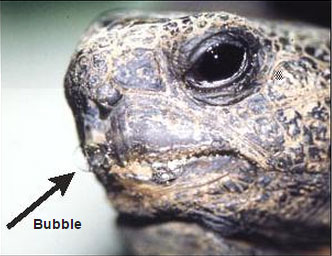 Look closely: this tortoise is blowing a bubble, a sign of upper respiratory tract disease that can kill or become chronic.
Signs include runny or blocked nostrils, difficulty breathing, runny eyes, puffed lids, and loss of appetite. URTD is communicable among tortoises. Predisposing causes are
usually stress related and may include improper diet, excess humidity, and crowding.
Antibiotics may eliminate the signs and prevent pneumonia and death.

Unless the date of hatching is known, accurately determining the age of a wild or captive tortoise is not possible. The rate of growth depends upon the amount of body building food eaten.

Tortoises develop none to several growth rings on each plate of the shell per year depending upon the quality and quantity of food eaten. For this reason growth rings are not an accurate guide. Eventually, rings wear and weather. A tortoise with a smooth shell is “old” but “how old”?

Tortoises live about as long as human beings.

Sexual maturity is a matter of size rather than age. For a female, this is usually at 7-8 inches. This is the shell length when measured down the middle of the shell front to back as a straight, not curved, line.

One way of telling the sexes apart is by the presence or absence of a concavity (depression) in the posterior third of the plastron (lower shell). The hatchling has a flat plastron, and for males it remains at until he is about 6 ½ to 7 inches long. Gradually, the male’s plastron becomes concave. The
plastron of females remains flat (or almost flat) throughout life. 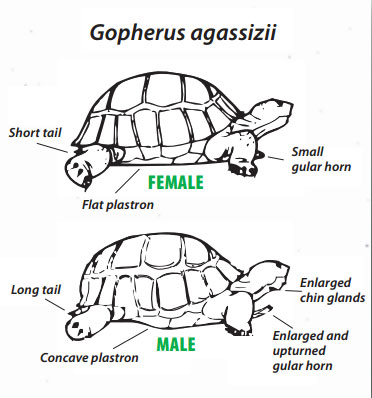 Males have longer tails and a longer and usually upturned gular horn that projects from the front of the plastron. The horn is not developed in juveniles and by the time it can be used to separate the sexes, the presence or absence of the plastral concavity can be used.

Males usually attain a larger size than females but all tortoises seem to
grow, even in minute amounts, throughout life. As males mature they develop chin glands, one on either side near the front of the lower edge of
the lower jaw. The enlargement of these glands is seasonal. At some times of the year the glands of the males may be as small as those of females.

The nails on the hind feet of older females tend to appear unusually long. This is normal, and may be an adaptation, as nests are dug with the hind feet.