Start a journal. Use a notebook that is at least 6″ x 91/2″. Use for this one purpose. There should be a minimum of two sections. One for General Observations and one for Periodic Measurements.

Suggested Kinds of Observations to Record

Other Observations or Occurrences.

See Tortoise Group Information Sheet #3 “Measuring Tortoise Size. Start a separate sheet for each tortoise regardless of how you organize the General Observations. Weigh and measure at least twice a year–just before brumation (hibernation) and upon emergence from brumation. The shell is slightly flexible and may expand and contract with the ambient temperature. If the tortoise is growing very slowly, a given measurement may be slightly smaller than the last measurement. The following is an example of how you might head journal pages and record measurements. 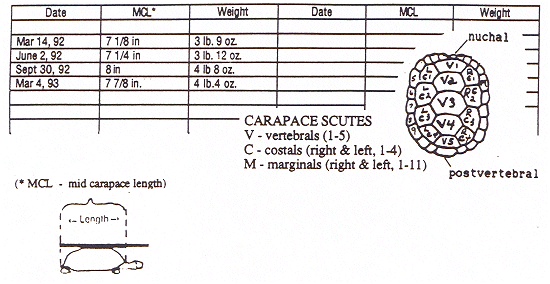